A version of this post was originally published on UrbanWire.

Meals on Wheels serves more than 2.4 million seniors across America, many of whom struggle with social isolation and loneliness. The administration’s proposed 2018 budget cuts $3 million from the Older Americans Act Nutrition Programs and eliminates funding for the Community Development Block Grant program. These two programs are the primary federal funding streams that support Meals on Wheels.

As we close out Older Americans Month, we reflect on how Meals on Wheels—and programs like it—can offer critical support for its clients’ physical and mental health.

Although social isolation and loneliness weigh heavily on older adults, connections to friends, family, and institutions rarely get a nod in discussions over the causes and costs of poor health outcomes among older adults. Studies have linked either loneliness or social isolation to an increased risk of diabetes, undernutrition, hypertension, arthritis, emphysema, depression, cognitive decline, and increased mortality. Social isolation has the same risk equivalent of early death as smoking 15 cigarettes a day. Fifty-five percent of older adults with poor health self-identify as lonely, compared with 25 percent of those with excellent health. 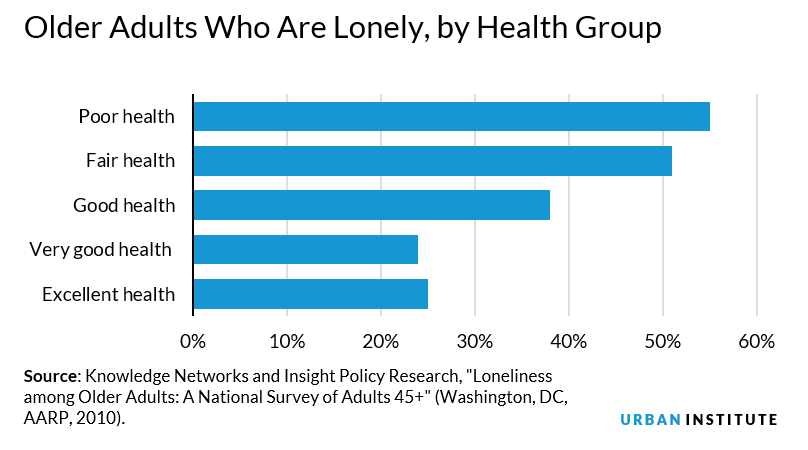 The story isn’t surprising. As friends and family relocate or pass away and mobility constraints limit travel, many older adults become cut off from important social supports. In one study, one in five community-dwelling noninstitutionalized older adults reported experiencing social isolation and loneliness.

Meals on Wheels has been shown to improve physical health outcomes by improving food security and reducing the risk of falls and hospitalization among recipients. Scholars have recently examined whether social services like Meals on Wheels can address social isolation. A 2016 study compared three groups of homebound older adults:

After 15 weeks, those who received home-delivered meals had lower self-reported loneliness than those on the waiting lists. This finding is crucial because older adults interested in meal delivery services are some of the most at risk for loneliness and social isolation. Meals on Wheels provides some recipients the only human interaction and connections to social institutions they receive all day.

Two-fifths of Meals on Wheels recipients said they would have little daily contact with people if not for those who delivered their meals. Fourteen percent of those on home-delivered meal program waiting lists reported having no one to call for help, and 20 percent were in touch with a friend or family member less than once a month.

Ninety-two percent of Meals on Wheels recipients noted that the service allows them to remain living at home without the social and institutional connections provided by regular meal deliveries. Those receiving home-delivered meals often are isolated from community institutions, friendships, and family relationships. Without regular contact with a Meals on Wheels delivery member, this population would be at severe risk for social isolation and loneliness.

As our aging population increases and health care costs become increasingly burdensome, Meals on Wheels and similar programs offer critical support that permit older adults to stay in the community, and they promote positive mental and physical health outcomes.

Those returns are worthy of investment.